Sharing the high altitude montane forests of the Virungas with its great ape relatives, the Golden Monkey is found mainly in the bamboo forests of the volcanic mountain chain that forms part of the boundary between Rwanda, Uganda, and Democratic Republic of Congo. Named after their distinctive golden or coppery patch on their upper flanks and backs, the Golden Monkeys can be tracked at the Mhaginga National Park in Uganda and in the Volcanoes National Park in Rwanda. 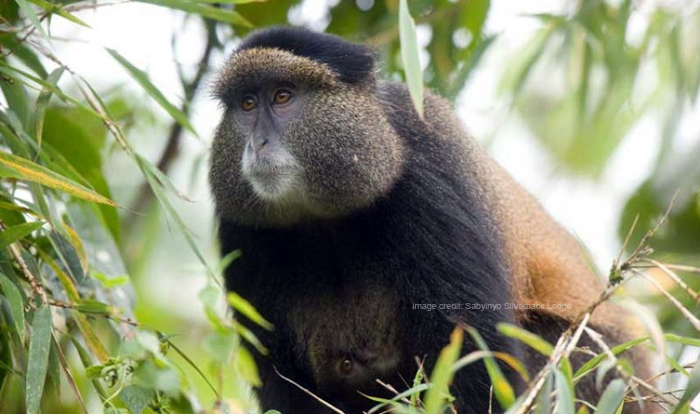 The main Kachima Group in Uganda has over 100 individuals, however the terrain at Mgahinga in Uganda is more challenging than in Rwanda, and if you would like to see these endangered and extremely beautiful monkeys, we recommend that you track them at the Volcanoes National Park. Small numbers can also be found in Rwanda’s Nyungwe Forest area, and plans are underway to habituate the Golden Monkeys at Rwanda’s Gishwati Forest.

Golden monkey tracking is less arduous and challenging than gorilla tracking, as they live close to the base of the volcanoes. There are currently two known groups of Golden Monkeys at the Volcanoes National Park in Rwanda. The Musongo Group lives way up on the flanks of the Mt. Karisimbi and the other group, Kabatwa, can be visited in its range on Mt. Sabyinyo.

Once you find the group, you have 1hr to watch the delightfully spirited monkeys play, leap from branch to branch, socialise with their family members and feed. They communicate with each other using a range of vocal calls and also visual expressions. Cameras should be set to a fast shutter-speed to allow for low light in the dense undergrowth and to better the chances of capturing the agile golden monkeys on film! At night, they also sleep in the tall, thick bamboo plants, about 2- 3m above the ground. They love to eat bamboo, and they seek out the soft shoots, leaves, flowers and fruit, and small insects and bird eggs. They do sometimes venture out of the forest to feast on potatoes and other food crops in the fields bordering the park. 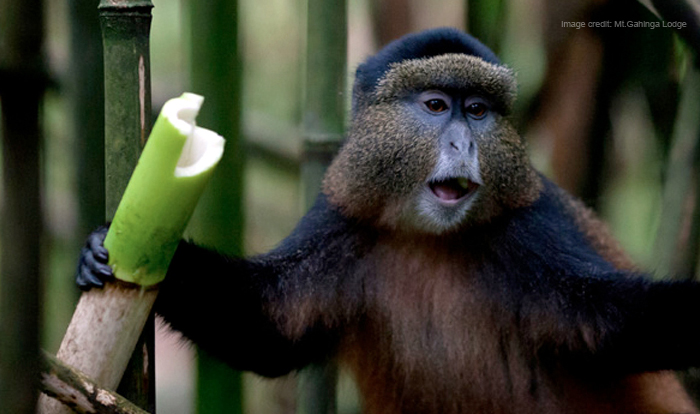 Golden Monkeys live in large family groups of between 30 and 75 individuals, led by the dominant male. Female Golden monkeys mature at about 4–5 years and produce one offspring after a 5 months’ gestation. The babies are nursed until they are about 2yrs old. Male offspring become independent of the group when they reach sexual maturity. Golden monkeys have a life span of around 20yrs.

Contact us to arrange your Golden Monkey tracking experience in Uganda and Rwanda with Tano Safaris: enquiries@tanosafaris.com.