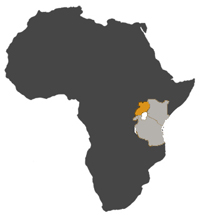 Read about Uganda, the Pearl of Africa, and then explore Kenya, Tanzania, and Rwanda.

The expansive Lake Victoria, the fables and history attached to the River Nile, and the spectacular Murchison Falls all form the emblematic backdrop to the vibrant and colourful attractions that can be seen and experienced in Uganda. An evergreen tropical garden, Uganda is known for its abundance of rivers, lakes and swamps, exciting mountaineering challenges waiting to be experienced on the legendary Rwenzoris- the Mountains of the Moon, and for its wonderfully scenic wildlife parks. The most widely visited areas in Uganda are the Bwindi Impenetrable Forest, the Queen Elizabeth National Park with its magnificent wildlife including big game such as tree climbing lions, and the Murchison Falls National Park with its dramatic waterfalls.

An exciting visit to Uganda would undoubtedly include a few days in the forests of Kibale and Bwindi, with their chimpanzee and gorilla groups that can be encountered on guided treks. Tracking chimpanzees in the wild is one of the most exhilarating experiences, and watching their high energy and noisy interactions are unforgettable. Gorilla tracking is often described as the most humbling and emotive experience in the world, and you can watch the huge and powerful, yet extremely gentle Mountain Gorillas feed and play in their family groups.

The Semliki Toro region is more arid and dry, compared to the verdant south. It has sizeable populations of big game, which can also be seen on exciting night game drives. The Kidepo Valley is Uganda’s very own wilderness country, and its animals, some of which can only be found in Kidepo, can be tracked on foot during exciting guided bush walks or while on a fantastic game drive. Relaxing boat rides can be enjoyed at Lakes Albert and Edward, and magnificent Shoe Bill Storks may be seen as they hunt for food among the papyrus reeds. Horse riding is possible at Lake Mburo National Park, a great chance to come close to shy zebras and giraffes, while for the thrill seekers, bungee jumping and white water rafting for beginners to professionals can be done at Jinja.

Culturally, Uganda boasts a long heritage and museums and historical sites can be visited to learn more about the past monarchies, while for those more interested in the present, visits can be arranged to the cultural villages of the Karamojong or the Batwa, to experience a day at their homesteads.

Get inspired by our sample Uganda Safaris, and contact us now for safaris to Uganda: enquiries@tanosafaris.com. We create tailor made safaris in Eastern Africa, a region that encompasses some of Africa’s most spectacular wildlife viewing areas, cultural heritages and landscapes.