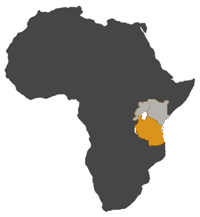 Experience the timeless attractions of Tanzania, and then explore Kenya, Rwanda, and Uganda.

From the snow capped summit of Mount Kilimanjaro to the colourful underwater life off its Indian Ocean coastline, wild and raw safari country to the south and west, and onwards to the magnificent north which offers some of the finest game viewing possibilities in Africa, Tanzania boasts an impressive and authentic variety of wildlife and spectacular, age old landscapes. Tanzania’s North encompasses Africa’s highest mountain, Mt. Kilimanjaro, and the country’s most popular national parks and reserves. These include Tarangire with its magnificent baobab trees and huge elephant herds; Lake Manyara, a stunning mosaic of forests and its soda lake; the still active and legendary volcano Ol Donyo Lengai; the Ol Duvai Gorge and prehistoric site where excavations are still being done to date, and the jewels in Tanzania’s crown- the Ngorongoro Crater and the wildlife-rich Serengeti plains.

Tanzania is also home to one of the deepest lakes in the world- Lake Tanganyika, and the forests that line the crystal clear lake provide shelter for the wild chimpanzees of the fabled Mahale and Gombe Forests. Parks such as Katavi, and the Selous Game Reserve and Ruaha National Park abound with some of the largest populations of big game and plains game, and are considered to be among the most remote and adventurous safari destinations on the continent. The Pemba Channel, off Tanzania’s coast, is believed to be one of the best locations in the world for scuba diving and deep sea fishing, while a long, rich and colourful history is associated with the Zanzibar Islands in the Indian Ocean. The culture, cuisine, arts and songs of the Coast preserve the influence of its Arab associations, having being under the Omani Sultanate rule in the distant past. All over the country, it is still possible to find old German and British colonial buildings and historical monuments and sites.

Get inspired by our sample Tanzania Safaris, and contact us now for safaris to Tanzania: enquiries@tanosafaris.com. We create tailor made safaris in Eastern Africa, a region that encompasses some of Africa’s most spectacular wildlife viewing areas, cultural heritages and landscapes.