THE GREAT MIGRATION OF WILDEBEEST & ZEBRAS

About 1.5 million wildebeest and half a million zebras and antelopes embark on the yearly Great Migration between the Masai Mara in Kenya, and the Serengeti and Ngorongoro Conservation Area in northern Tanzania. The wild animals move around in massive herds stretching far and wide beyond the horizon, their movement governed by the distribution of rains and the availability of grazing and drinking water.

Visiting the Serengeti/ Masai Mara area gives you a front row seat to this incredible wildlife spectacle, which is especially dramatic when the animals cross the Grumeti and Mara Rivers, infested with giant Nile Crocodiles. Predators such as the big cats, hyenas, jackals, and eagles abound, and can often be seen hunting.

The animals follow a certain pattern in their movements, however due to the vastness of their range and the unpredictable nature of the weather, it is important to be up to date on their current location. We will help you choose the camp or lodge best suited for better chances of seeing them with your own eyes. Mobile luxury camps follow the Migration and may be the best option for you. We can’t guarantee that you will see the famous Crossings, but we can guarantee an exceptional wildlife experience! 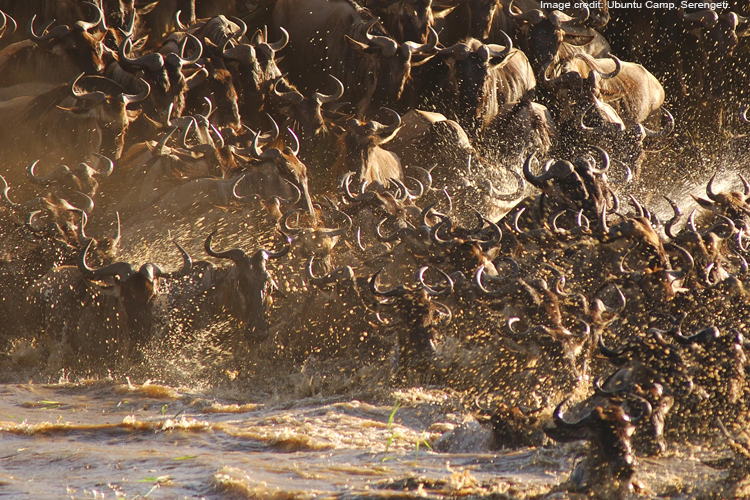 As a general guideline, the Great Migration can be seen in the areas and time of the year indicated below.

The Mara-Serengeti ecosystem: The Mara-Serengeti ecosystem is made up of 7 parks and reserves, which are the Masai Mara in Kenya, and in Tanzania, the Serengeti National Park, and the Ngorongoro, Grumeti, Maswa, Ikorongo and Loliondo conservation/controlled areas and their surroundings. The extremities of the routes used by the migratory animals, covering some 30,000 square kilometres, define the extension of the entire ecosystem. The Mara Triangle is the greenest and wettest part of the entire ecosystem. The Ololoolo Escarpment and the curvature of the Mara River define the shape of the Mara Triangle.

December to March: Wildebeest, zebras and gazelles congregate in the southern areas of the Serengeti, primarily in the Ndutu area. Here, the grass grows short and is richly packed with minerals (due to the volcanic history of the land), and this grass is extremely important for the growth of the young wildebeest calves. An estimated 400,000 new calves are born each year in the Ndutu/ Ngorongoro area, approximately 80% of them in February.

April to May: The mineral rich grasses of the Serengeti have all dried up, the water pools have disappeared into the dry ground and it is time for the animals to seek greener pastures. It is time for the herds to move on, and by following the rains, they usually trek northeast towards the central Seronera area and to the Western Corridor. There are always plenty of animals in the heart of the Serengeti, thanks to permanent rivers and pools of water that the animals need to survive. While the rest of the park may be devoid of many herbivores during the rest of the year, the Seronera area is special with its resident herds of plains game and well-fed predator population. 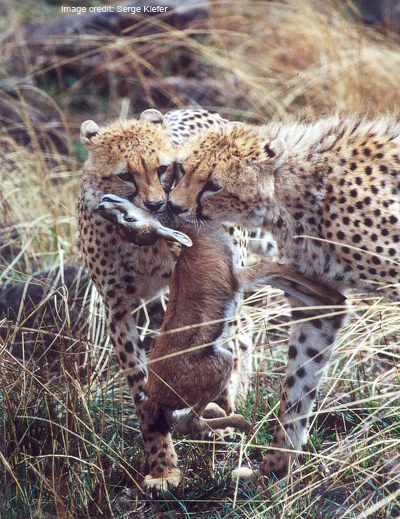 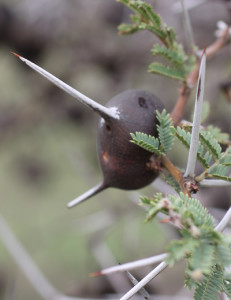 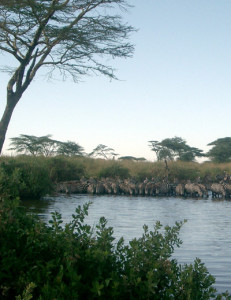 The Western Serengeti is enchanting, and somewhat mysterious, with an abundance of Whistling Thorn acacia bushes. This area is also home to hunter-gatherer tribes, who welcome the arrival of the migratory herds for an easy (though illegal) source of food. By late May, the wildebeest leave the acacia and Whistling Thorn country and head into the northern Serengeti region.

May to June: Sometime between the months of May and June, a curious ritual occurs among the wildebeest. This is “The Rut”, when wildebeest bulls display in a spectacle of noise and frantic activity, competing for the rights to mate with the females. The bulls, which have up to now been part of an enormous, tranquil herd, suddenly fight for identity and for their own territories, anxiously rounding up the female wildebeests. As the Migration progresses, it extends from the central Seronera area of the Serengeti, and up west to the Grumeti Reserves. The Seronera area can get quite busy, however the privately managed Singita Grumeti Reserves offer an exclusive chance to experience the Great Migration. The west is where the animals encounter crocodiles, many for the first time in their lives. The seasonal Grumeti River, home to some of the largest and oldest crocodiles in the world, has amazing beasts that weigh over 1000kgs. In order to maintain their impressive weight and size, these crocodiles need to eat a lot, and they do, at least during the river crossings done by the hapless wildebeest, zebras and gazelles. The crocodiles fill themselves up so much that during the rest of the year, an adult male crocodile will probably eat less than a stork!

Beginning mid June: The Migration begins to spill over in to Kenya’s Masai Mara, lured by the rainfall and new grasses of the Mara. Perhaps the first sign of the arrival of the visiting herds is the movement of the “resident” wildebeest; they are usually found in small herds bordering the Mara, and they gradually start to congregate and move inside Masai Mara itself. They will eventually meet up with the Tanzanian herds and carry on upwards and onwards, towards the Mara River.

The Mara River houses thousands of hippos distributed into family groups along the length of the river. As they move in and out of the water, they create pathways that are subsequently used by the wildebeest and zebra to approach, and to cross the river. Wildebeest need to drink water daily, and nervous herds amassed at the river’s edge are a common sight at this time, however it can take you hours, even days, to have the luck to observe a river crossing. Once they do decide to cross, nothing comes between them and the green grass on the other side of the river, not even the attacks by the crocodiles which can be savage and brutal, but taking into account the number of animals that does make it safely across the river, it is a sacrifice that is required for the benefit of the rest of the herds. 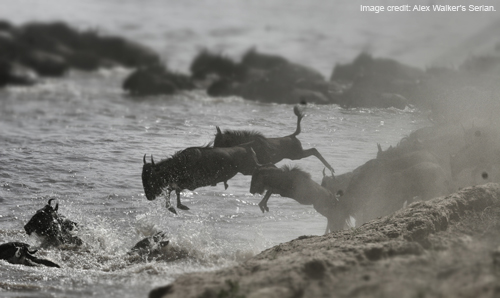 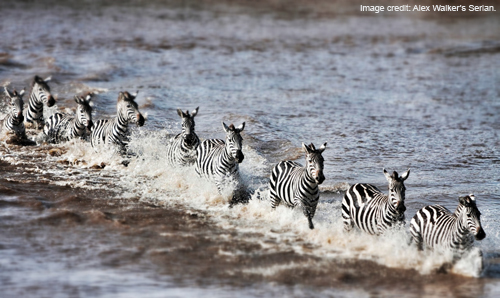 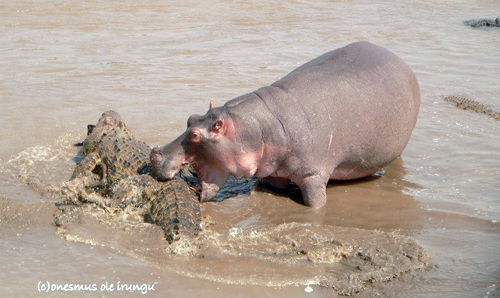 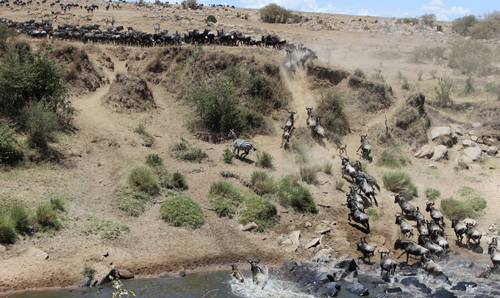 The wildebeest and zebra do not all cross at one go, but over a period of days or weeks, and quite often they will cross- and re-cross the same river, and even venture back into Northern Serengeti, as if undecided on exactly where the grass tastes better! Lush, sweet Red Oat grass and the Mara’s permanent waters maintain the animals during their stay. Yet even in this paradise, there is a hell, well represented by the multitude of hyenas, jackals, leopards, lions, vultures, crocodiles, eagles that eagerly await their arrival. 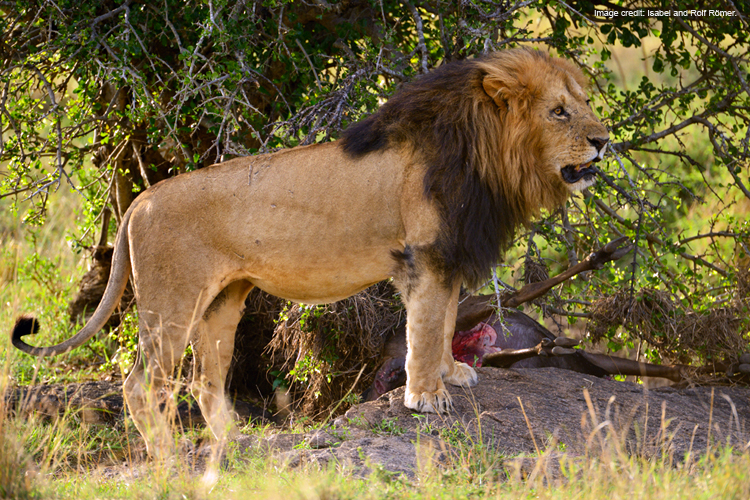 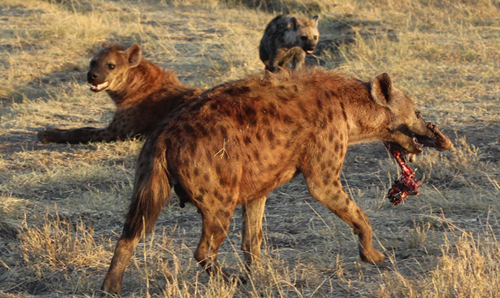 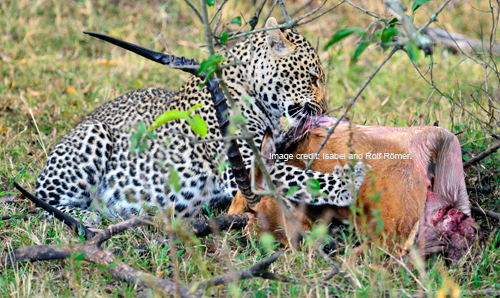 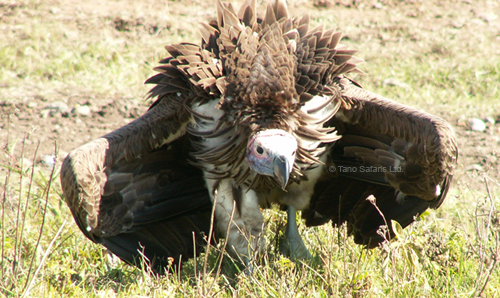 From October: From October, the Migratory herds group up and head back south, yet the chances of seeing them in the Masai Mara are still very high up to mid November. The animals have to cross the Mara River once more to return to Tanzania. The chances of seeing the crocodiles in action are reduced as most of them are still recovering from their initial feasting. Northern Serengeti is busy again, as are the Loliondo plains, east of the Serengeti. They don’t stay around for long, and the gathering clouds and smell of distant rains drive the pregnant herds southwards to the short grass plains. Finally, after having trekked for some 1500km, the Migration returns to Ndutu, to the vast plains of southern Serengeti where a new generation of calves will be born to start the cycle all over again.